Venting is a process that is used to remove trapped air from the closed mold and volatile gases from the processed molten plastic. Without venting, the trapped air will compress as plastic tries to force it out of the mold and the air will ignite, burning the surrounding plastic and causing charred areas on the molded part. Trapped air also keeps the plastic from filling in those areas of the cavity where the air is trapped so a non-filled (or short) part is molded. Volatile gases will be absorbed by the plastic and will cause voids, blisters, bubbles, and a variety of other defects.

The concept of venting is simple: provide many pathways to allow trapped air and volatile gases to escape from the mold quickly and cleanly. The pathways should lead directly from the edge of the cavity image of the mold, or through ejector and/or core pin clearance holes, to the outside atmosphere surrounding the mold. These pathways need to be deep enough to let air and gases out easily, but not deep enough to allow the molten plastic to escape through them.

Venting should be present on every mold and the vents should be inspected periodically to make sure they are not blocked due to scale buildup. The scale can build up especially if the vents are not properly designed. The correct design is discussed in the next section.

Depending on the type of plastic being molded, and whether it is stiff or easy flow, the vent depths should range from 0.0005'' to 0.0020'' in depth. The following Table gives average depths for some common materials.

The vent acts like a window in a wall. When the mold is closed the vent appears as a small tunnel going from the cavity to the edge of the mold. The dimension nomenclatures for the vent are shown in this sketch. 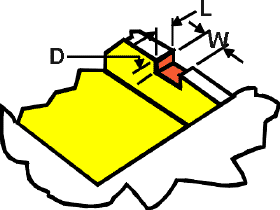 There are three major dimensions for the vent. First is ``D'', the vent depth, already determined by the chart shown in the Table above.

Then, comes ``W'', the vent width. This can be anywhere from 1/8 inch wide or more, and a common width is 1/4 inch. There is no maximum width to a vent, but to be practical it should be somewhere between 1/8 and 1/2 inch in width.

The final dimension is ``L,'' which stands for land. This dimension should be a minimum of 0.030 inch and a maximum of 1/8 inch. If it is too short, the remaining steel is too weak and will not hold up. If it is too long, the tunnel shape of the vent is too great and the hot gases and trapped air will condense in the tunnel as they travel through the opening, and block the venting action. This will not occur in the first 1/8 inch of travel. Therefore, we make the ``L'' dimension a maximum of 1/8 inch and then open up the depth and/or width of the vent to allow the condensed gases to deposit beyond the vent itself.

How Many Vents Are Needed?

The simple answer is that you cannot have too many vents. The more detailed answer is to have at least 30% of the perimeter of the cavity image in vents, equally spaced around that perimeter, as shown in The following sketch. 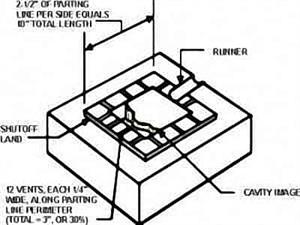 Note that the part is small. It measures 2-1/2'' per side. By measuring the perimeter of the part, we add up the sides to get a total of 10 inches. If 30% of that should be in vents, we need a total of three inches worth of vents.

If we use 1/4 inch wide vents, we end up with a total of 12 vents for this part. They can be equally spaced as shown, or begin by placing a vent in each of the four corners, one directly opposite the gate, and the others equally spaced in the remaining areas.

Another, more conservative approach to venting states that there should be a vent at least every inch along the perimeter of the part cavity. In that case, there would be at least 10 vents for the part in the sketch above.

Do not forget to vent the runner. Any air or gas that is trapped in the runner gets pushed into the cavity and must be removed from there. One of the big advantages of venting is that, if properly done, it allows gas and air to get out quickly and helps the plastic to inject faster and at lower injection pressures, thereby reducing stress and speeding up cycle times.